This homemade cinnamon swirl bread recipe is a family favorite and only requires a handful of basic ingredients.The bread is unbelievably soft and moist!

Hot and fresh out of the oven,the heavenly aroma of cinnamon alone will captivate our soul.The bread is buttery soft and those beautiful swirls are deliciously sweet.

How to make Cinnamon Swirl Bread

Today let’s see how simple and easy it is to make this Homemade Cinnamon Swirl Bread.Follow my tips and soon you’ll be baking Easy homemade croissants, Soft and Fluffy Dimple Dinner Rolls, and even Star Bread! With only a handful of basic ingredients, your kitchen will transform into a bread bakery.

We can make this Cinnamon swirl bread in 4 Simple Steps.

This cinnamon swirl bread is made with a dough which is enriched with milk and butter unlike a regular white loaf and so it will taste more delicious.

For making Cinnamon Swirl bread we need only a few basic ingredients.

Mix together all the dry ingredients,FLOUR,SUGAR,SALT and YEAST in a bowl.

Whisk everything together to make sure everything is evenly distributed in the flour.

Add the MILK (Warm the milk so it’s not refrigerator cold, for 1-1.5 minutes in the microwave on low power. It shouldn’t be hot, just warm) and Melted BUTTER (or softened) into this.

Mix everything together and make sure there are no dry patches left behind.

Keep the dough covered for 8-10 minutes.This will make the dough get hydrated properly and the gluten strands to relax for a while, which will make it easy for us to handle the dough.

Knead the dough for 8-10 minutes or until you get a soft dough.

Note:If you have stand mixer,then “preparing the dough” is so easy.Let the stand mixer do all the mixing and kneading for you.And you don’t need to wait for 10 minutes until it is easy for you to handle the dough.

2.Shape the dough/Roll the dough

Place dough on a lightly floured work surface and with a floured rolling pin, shape into an approximately 7.5 x 14-inch rectangle. Sprinkle the cinnamon sugar mixture on top (and optionally raisins).

Make sure to roll up your loaf tightly, and be careful to not let the loaf rise too much in the pan while baking (too high temperature may cause the loaf to rise too much)or you will get big gaps between the filling and dough.

Pinch the ends to seal. Place into prepared loaf pan , seam side down.

Cover loosely and allow to rise in a warm environment until the dough rises to the top of the pan, about 2 hours.

Bake at 350°F (177°C) preheated oven.Bake until golden brown and, when gently tapped, the top of the loaf sounds hollow, about 35-45 minutes.

Do not place it on the high rack as it could brown the top way too fast (as the dough contain sugar and milk in it ) even before it has a chance to finish cooking in the middle of loaf.

If you find the top of the loaf is browning too quickly as it bakes, tent with aluminum foil . I covered the top with an aluminum foil at around 25 minutes of baking.

I kept it in the lowest rack of my oven and in 45 minutes it came out beautifully baked.

Slice and serve. Cover and store leftovers at room temperature for 5 days or in the refrigerator for up to 1 week. Bread tastes delicious when toasted in the toaster!

A loaf of this cinnamon swirl bread is bound to bring a smile to anyone’s face, and an amazing aroma to your kitchen.Enjoy!

How to store any left over bread

To maximize the shelf life of homemade bread, cool thoroughly before storing and place in plastic storage bag or breadbox, or wrap in foil and store at room temperature. Properly stored,cinnamon swirl bread will last for about 4 to 5 days at normal room temperature.

Like any other homemade bread(as we are not using any preservatives or bread improvers), this cinnamon swirl loaf may also get dry on the next day.But when toasted,or made warm in a microwave,they are super delicious!

How to freeze cinnamon swirl bread

You can also pre-slice the bread and freeze the slices in a freezer-safe baggie. The bread might dry out a bit this way, but it’s handy to have the slices on hand whenever you’re craving cinnamon swirl toast.

Can i freeze the dough

Yes you can freeze or keep the dough in refrigerator after the first step.Then whenever you need to bake them,take it out bring the dough to come to room temperature and then continue with

Why my cinnamon swirl bread get seperated

There are two main reasons that swirl in cinnamon swirl bread tends to gap open. The first is that the steam from the dough and filling coupled with the gases emitted by the yeast pushes out and up, smooshing your layers and leaving a noticeable gap often under the top layer of your swirled bread.

The other issue is that there is no sticking power in the swirl. Most folks slather on butter and then their sugar and cinnamon and the fat makes everything slippery so the layers can’t bind. Fixing the binding problem also fixes the gas issue and you’ll also end up with a lighter bread that has great oven spring and rise.

How to prevent the separation of layers

In this recipe i have not used any binding agents and the bread turned awesome without any obvious separation between the layers.

At the same time,I have read on another site that using an egg in the filling–or brushing egg onto the dough before filling–helps to bind. That makes total sense to me.

As an experiment, i tried egg wash (1 egg beaten) ,brushing the beaten egg on top of the rectangular dough before adding the cinnamon powder and sugar at step 2.Andafter baking, they came out as the layers are bonded together.So i liked the idea of egg washing and it worked for me! 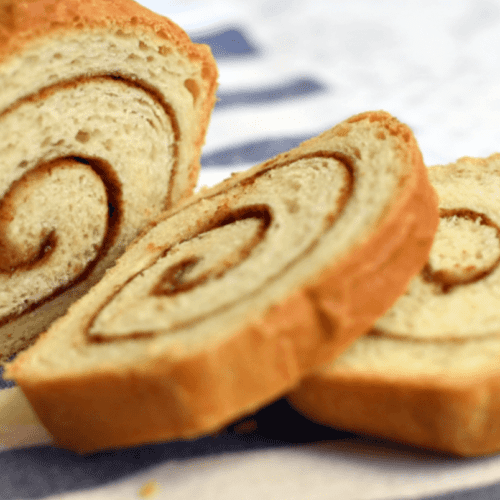 I just signed up to your sites rss feed. Will you post more on this subject?

I am going to go ahead and bookmark this content for my sis for a coming up study project for school. This is a beautiful web site by the way. Where did you get a hold the theme for this website?

I will tell that youre very knowlegeable. Im launching an internet site soon, together with your information can be very helpful for myself.. Thanks for your help and also wishing everyone the achievement in your business.

Im attempting to figure out how to subscribe to the RSS feeds, but cannot figure it out. Some help would be awesome Thanks