Why You will love this Quick Homemade Cinnamon Rolls Recipe

The cinnamon rolls made with recipe are

Why is this recipe called a “Quick” Homemade Cinnamon Rolls Recipe

For making cinnamon rolls, it require a long time for the proofing and preparation.

This is a cinnamon rolls recipe, which does not require double proofing as many other recipes.

In this quick cinnamon rolls recipe we skip the first proofing, which is about two hours.And thus we can save a lot of our time.

The technique is the same and the difference is in shaping and frosting. Quick Dinner Rolls Recipe is by far, one of the most popular recipes on the blog and for a good reason. So it might be a good idea to hop over to the post and watch the VIDEO

To make the bread dough

We can make them in FOUR SIMPLE STEPS

Into a bowl add the milk,softened butter, sugar,salt,yeast and egg and combine everything together.

Make sure all the ingredients are at room temperature and the milk should be preferably warm(not hot).

Then add in the flour into this mixture and combine them together to form a shaggy mass of dough.

If you are kneading the dough in a stand mixer, use the dough hook attachment to knead the dough.

If you are kneading the dough by hands, transfer the dough on to a clean work surface and knead the dough for a few minutes(3-4 minutes)until it form a smooth dough.

The dough may feel sticky in the beginning, thats ok,(that’s the way it should be); you may be tempted to add more flour but don’t do that.The dough will come together in about 4 minutes of kneading.

Shape it into a ball ; then flatten it a little and then cover it with a bowl or kitchen towel and let the dough rest on the counter for five minutes.This is not for proofing the dough, but this is to let the dough sit for a few minutes so that the gluten stands will relax.

This resting will prevent our dough from enormous rebounding back of the dough while rolling it into a thin rectangular sheet.

So for the next step of shaping the rolls, first we need to roll the dough into thin sheet (1/ 4th inch thickness).

Pat, stretch and roll out the dough to form 18X15-inch rectangle with long edge nearest you.

Then spread very soft butter all over the surface.

Then sprinkle on the filling mixture as evenly as possible.

Starting with long edge nearest you, roll the dough into a cylinder.

While rolling, keep in your mind not to roll them tightly as they need some room for them to expand while proofing and while baking.

If they are rolled tightly, the rolls will have pointed center as the center will rise up as it doesn’t have enough space to expand side ways.

Mark gently with a knife/scraper to create 12 equal portions. For the cleanest cut, slice by holding a thread or strand of dental floss underneath the cylinder, and cross ends of the floss over each other and pull. Slice cylinder into 12 portions (about 4-5 cm each).

Transfer to a baking pan(I have used 11.5X7.5-inch baking pan), that’s been greased with butter or cooking spray.Slight variation in size of baking pan is not an issue.

Cover the pan loosely with plastic wrap and allow the rolls to rise until puffy and the rolls are touching one another; 50 to 60 minutes.

We can also bake them in a larger baking rimmed baking tray (15 x 10 inch).As the tray is big, it will yield wider cinnamon rolls with more browning around edges.The cinnamon rolls will still be soft and fluffy!

Let the cinnamon rolls cool down for 2-3 minutes.Slather on that cream cheese frosting while the rolls are still warm.

Watch the video to see how quick easy it is to make homemade cinnamon rolls.

How to make the best cream cheese frosting for cinnamon rolls

Cinnamon rolls are not the same without that cream cheese frosting on top.

It is so easy to make this cream cheese icing.

Keep the butter and sugar at room temperature as it will help us to combine them easily.

Into a bowl add the Softened butter, cream cheese, vanilla sugar/vanilla extract and a pinch of salt to balance the sweetness.

Thoroughly beat until they are light in texture and pale yellow in color.

Then add the powdered sugar little by little beat everything together until you get a silky smooth, light cream cheese frosting.

You can add some milk/heavy cream if you want your cream cheese frosting a little more thin.

How to make Soft and fluffy Star bread

How to store homemade cinnamon rolls

These homemade cinnamon rolls can be kept at room temperature for upto 3 days.Cover the tray with foil or store them in an airtight container.

These cinnamon rolls remain soft the next 2-3 days when kept at room temperature in an airtight container.

I recommend you to rewarm the rolls for a few seconds in the microwave or for 7-10 minutes in a 350 F preheated oven(just before serving) to get that “fresh out of the oven” taste and softness to rolls.

Do this quick cinnamon rolls have to be refrigerated?

If you plan to keep the cinnamon rolls for more than three days, then it is better to store them in an airtight container and keep in refrigerator.If stored in the fridge, the rolls will last a few days longer.

Yes you can make them ahead.

Prepare the dough as in step 1; Cover and place in the fridge to rise overnight (slow cold rise). On the next day, take the dough out, bring it to room temperature(let the dough sit for 20-25 minutes at room temperature) and then roll out the dough, fill, shape, rise and bake the rolls.

Can i shape the rolls and then refrigerate them

Yes,You can shape the rolls and then store it in refrigerator and then bake them the next day morning.

How to refrigerate the uncooked cinnamon rolls day before and bake in the morning.

After shaping the cinnamon rolls,place them on the baking tray or baking pan.

In this way,If you are making them ahead of time, don’t let them rise at room temperature right now like you normally would for the recipe!

Instead,cover the pan with lightly greased plastic film and immediately pop them in the refrigerator.They can stay in the refrigerator for up to 24 hours. The longer we keep them in fridge,the more are chances that the filling may liquify and seep out of the rolls .Minor leaking happened to me every time i tried this method.But don’t get panic,The rolls will be baked properly.

The next day morning or when you want to bake the rolls , remove the tray from fridge ONE HOUR prior to the time you will start baking them. Let them rest in a warm, draft free location for 40 minutes, then start preheating oven to 350 F.. Once oven is heated, bake rolls for approximately 20 minutes (or until lightly browned).

Can I store the baked cinnamon rolls in refrigerator

Yes you can store the baked cinnamon rolls in fridge for upto 5 days.I have done this several times and i love this method.

How to freeze baked cinnamon rolls

This is the most convenient and easiest method of freezing cinnamon rolls. Everything is taken care of already and you just rewarm the rolls in the microwave or the oven as you are ready to eat them.

How to reheat cinnamon rolls

How to reheat cinnamon rolls in a convection oven

Rewarming the cinnamon rolls in an overtakes more time.But this is the ideal way to reheat your cinnamon rolls and have them all ready for consumption in minutes.

How to reheat cinnamon rolls in a microwave oven

The microwave is another good option to reheat the cinnamon rolls. In under a minute, you can enjoy your sweet treat, all nice and warm.

Note: While the microwave is still a recommended option;We need to keep in our mind that reheating the rolls in microwave oven, can make the rolls soggy, so don’t over do them.

What type of yeast can be used for making quick cinnamon rolls?

You can use both active dried yeast or instant yeast to make this quick homemade cinnamon rolls.

Can I skip adding egg in this cinnamon rolls recipe

Yes ,you can skip egg in this quick cinnamon roll recipe.

I have made cinnamon rolls using this same recipe skipping egg.I added the same volume of liquid (milk/water) for 1 egg.You can add 45-50 ml milk/water instead of 1 egg in this cinnamon roll recipe if you are not using egg.The cinnamon rolls turned out soft and delicious, when i tried this way.

Can I freeze the shaped unbaked cinnamon rolls

.After dividing the rolls into 12 equal pieces and placing them on a baking dish; i covered the pan with a plastic film and then took directly to the freezer (before proofing).

When i wanted to bake the cinnamon rolls,took the pan out of the freezer.I let the rolls come to room temperature and then puff up or rise.It took me around 2 hours 15 minutes for the rolls to rise(but I should say ,I was not satisfied by the amount of rise)

There was a considerable amount of leakage from the rolls too 🙁

Then i baked the cinnamon rolls in a 350F preheated oven for 20 minutes.But the rolls were not done.So i baked for another 4 more minutes and they came out well baked.There was pooling of butter and sugar in side the pan when i took it out of the oven.But then i noticed that the butter got absorbed by the cinnamon rolls when it is cooled.

Anyway,the rolls tasted absolutely delicious; though they were not as light and airy as the freshly baked ones.

Freezing the cinnamon rolls and then baking is also a great option.

“Freezing the unbaked rolls may result in a poor rise, and the filling is likely to leak out and pool in the bottom of the pan as the sugar melts. Instead, freeze the baked cinnamon rolls after they’re fully cooled, without any icing. Wrap tightly in plastic wrap and freeze for up to one month.” -King Arthur Flour

The 3 main reasons that may cause the rolls to come out dry and/or dense, is

So make sure the consistency of the final dough is very soft and smooth, be sure to check the expiry date of your yeast ,bake until the rolls are perfectly baked and make sure the dough got doubled in size during proofing before proceeding. 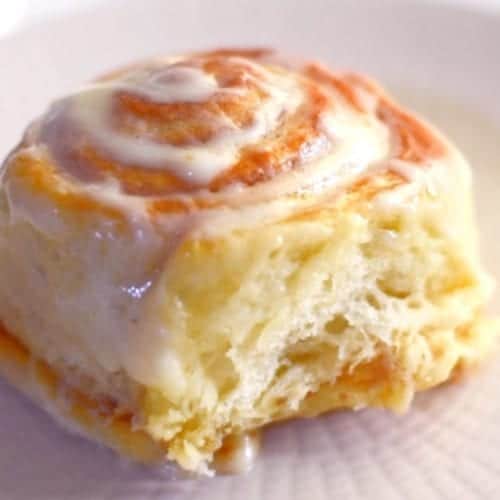 DIVIDE AND SHAPE THE DOUGH

My kitchen smelled so good! My family kept asking when will it be ready🤗 We all loved LOVED it🎉🎶Saving this recipe it’s a keeper for sure! Thank you, Now to decide what I will make next😘

Appreciate it for all your efforts that you have put in this. very interesting information.